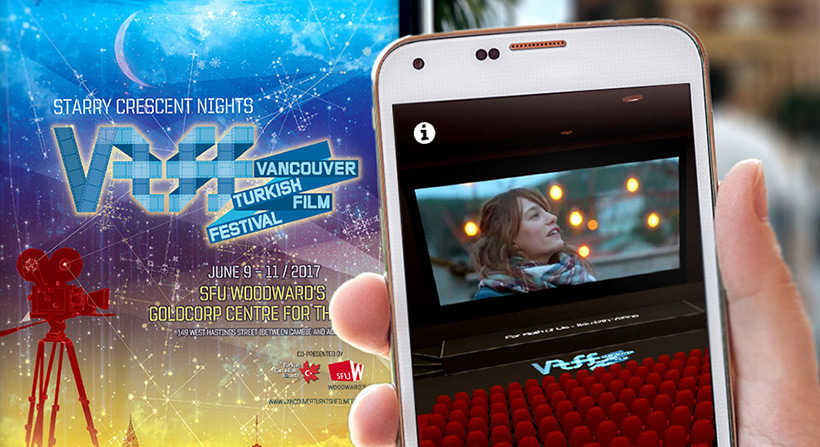 by Stambol
in Press Release
Comments

VANCOUVER, BC, CANADA – May 29, 2017 – This summer a striking poster will appear around downtown Vancouver advertising Starry Crescent Nights, the theme of the 2017 Vancouver Turkish Film Festival. But this isn’t just another poster for Vancouver’s thriving film community. This innovative poster utilizes Augmented Reality, or AR, and engages viewers like never before. Download Stambol Studios’ app for the VTFF and you’ll be able to bring this poster to life and experience high definition clips from the films.

Co-presented by the Turkish Canadian Society and SFU Woodward’s, the VTFF was founded in 2011 by film industry professionals seeking to showcase exemplary Turkish cinema to Vancouver audiences.

“Having our friends at Stambol Studios produce an app for VTFF was a natural fit. We were delighted to have the opportunity to bring an AR experience to festival-goers. As filmmakers, we are already brainstorming other ways to use this amazing technology, including VR,” says Eylem Sönmez, VTFF Director and volunteer with the Turkish Canadian Society.

The app developed by Stambol for the VTFF represents a leap forward in how the independent film community in Vancouver engages potential audiences.

“Bringing the VTFF’s posters and brochures to life this year was an exciting project we embraced with enthusiasm. We haven’t yet seen local AR on the streets of Vancouver at this scale before, so this was a huge opportunity for us – and the Festival. The average person is still discovering how AR and VR can enhance our lives. The VTFF’s printed collateral is a great example of how AR has the potential to change the way we experience and interact with traditional media,” says Dogu Taskiran, CEO of Stambol Studios.

Starry Crescent Nights from the VTFF runs from June 9th through the 11th at SFU Woodward’s Goldcorp Centre for the Arts in Gastown.

About the Vancouver Turkish Film Festival:

Founded in 2011 by a group of film enthusiasts, directors and industry workers, the Vancouver Turkish Film Festival is a collaborative effort that aims to showcase a variety of Turkish films. The VTFF takes pride in showcasing the best of contemporary Turkish cinema, featuring both popular mainstream favourites and internationally acclaimed, award-winning films.
www.vancouverturkishfilmfest.com

About the Turkish Canadian Society:

Established in 1963, the Turkish Canadian Society’s vision is to have a resourceful, compassionate, caring, vibrant community that embraces, nourishes and supports everyone, takes pride and ownership in its cultural roots, and collaborates with other Canadian organizations and charities that share the same foresight.
turkishcanadiansociety.org

Stambol is a VR & AR studio specializing in immersive experiences for architecture & real estate marketing, industrial showcases and brand engagement. We create inspiring and memorable virtual experiences for businesses to showcase their products and brands, engage their audience by fueling excitement, and establish a strong emotional footprint.