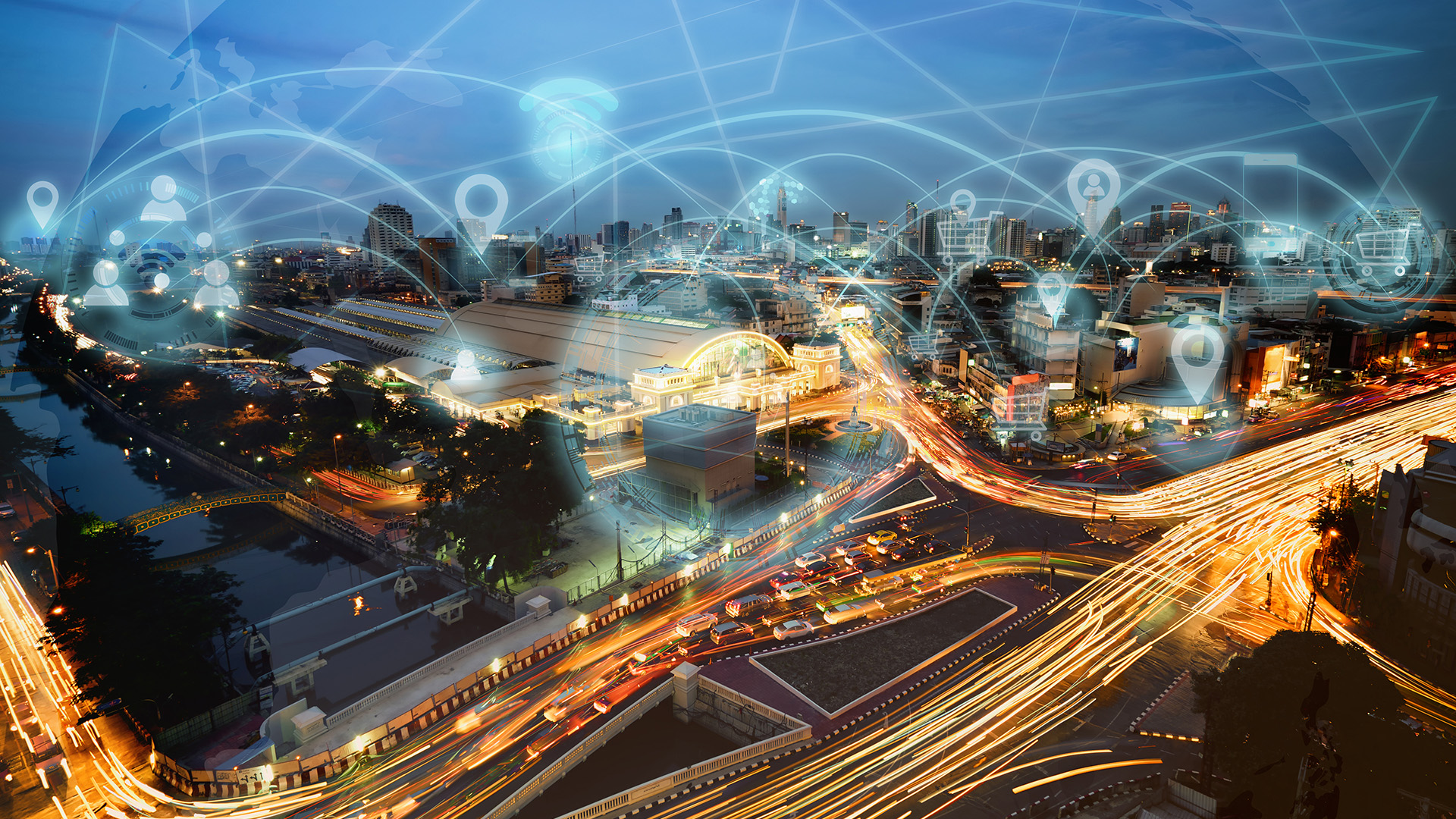 2021 will bring big changes to public infrastructure in cities around the world. 2020 has been a scary year and the challenges are far from over.  The climate is teetering on the brink – as is our global economy. But if, like us, you believe success is our only option, keep reading. We think Industrial AR is going to be a major factor in taking a critical leap forward.

At Stambol, we think enough visionaries and innovators will be charging into next year ready to offer solutions and do real-world work. So, as we start to dig in and do the difficult and complicated work of addressing climate change and repairing economies through upgrades to our cities, we’re looking at construction and transportation professionals to take the lead.

Although we think of the AR Cloud as capturing the entire planet, the most data-dense areas will naturally be cities. And they will have the most impact on our future.

What is a Smart City?

We know there are a great many civil engineers and urban planners already working on making smart cities a reality around the world. But to say, “it takes a village,” should in this case sound more like, “it takes a planet,” because that’s the literal truth.

One of the biggest challenges facing infrastructure innovators at the moment is finding a cohesive definition for what constitutes a smart city. How do you sell a plan to city counselors when you can’t clearly define the steps involved? How do you ask for tax dollars when you’re not sure exactly what needs to change and why? Or where to start?

The idea of smart cities is a relatively new one, but to make the idea truly mainstream – and get it implemented properly over the next decade – we should understand what it is and how to get there.

For the purposes of simplicity today, let’s say that smart cities are dense urban areas that will be powered by sensors and input, managed by both human hands and highly intelligent software.

According to postscapes.com, there are currently 21 megacities in the world and they use 60% to 80% of the world’s energy. We need these huge urban centres to get smart, and fast.

“By 2025, the number of megacities is expected to reach 29 with an additional five in Asia (Shenzhen, Chongqing, Guangzhou, Jakarta, and Lahore), two in Latin America (Bogota and Lima), and one in Africa (Kinshasa)” – Trevor Harwood, Founder, Postscapes

We can’t afford to keep talking about smart cities as a thought experiment or as a project someone somewhere else is working on. It won’t be the problem of the committee after yours. We need to start these changes now. Start and then accelerate the overhaul of dated urban infrastructure. But how can Augmented Reality help? For a start, Industrial AR is actually a great fit for both a) interacting with equipment and structures and b) interpreting and managing huge volumes of data.

New structures we build today absolutely must have BIM data carried from design through to physical products. This will be true whether we’re talking about sewer tunnels that drain streets or overpasses that re-route express transit services. And anything being repaired and renovated must have the same sensors and digital counterparts added wherever possible.

If you’re in the position of discussing urban transformation to a smart version of your city, you’ll want to bring Industrial AR and related terminology into the conversation.

AR interacts with industrial physical objects via a Digital Twin. Either a machine or an entire system can have one of these digital counterparts. When the sensors and software required to produce a Digital Twin are incorporated at the design stage, the object can often be managed remotely for even more efficiency and safety. This means not digging up streets to troubleshoot sewage or electrical problems. And not exposing workers to danger.

Drones that inherently have Digital Twins as part of their designs are another great example of how this tech can work. In the future, this looks like an operator sending in a robot in lieu of going himself to a fix a power line that came down in a storm or a water pipe that burst in a winter freeze.

Digital Twins will also be capturing huge amounts of data that we need to deal with effectively. And this is where Augmented Analytics comes in. The volumes of information collected by systems in smart cities simply can’t be processed and analyzed by people. What we can do is employ software, ideally applications that learn, to take all those tiny facts and figures, crunch them, and make recommendations. It’s still up to human decision-makers to act on what Augmented Analytics tells us.

To move forward with a municipal transformation that includes Industrial AR, you need to start identifying which projects to tackle. So, we’ve got some examples to get you thinking about specifics.

Most urban areas already have some form of light rapid transit incorporated into transportation systems. AR can enhance everything from rails themselves to user experience via timetables. Train cars, busses, even bus stops can be upgraded with AR.

Historically, most people who can avoid public transportation do so because it can be unreliable, unsanitary, crowded, and in some cases unsafe for multiple demographics. As user costs have gone up, dissatisfaction with these issues has been exacerbated. A growing portion of the population wants to use public systems as a contribution to going green. But it hasn’t been enough.

The above-mentioned safety issue is just the tip of the iceberg in the smart megacities of tomorrow. Fob-operated locks and a detailed network of cameras are already coming. And while we hope the improved quality of life will naturally contribute to a drop in crime, we can’t operate with that expectation alone.

Smart cities with augmented systems will be able to do more in terms of simply making theft and assault more difficult and impractical than before. We know that smash-and-grab type crime will always exist, but we also know that a password and/or fob operated lock that can send an alert to the police is going to be harder to track than traditional analog mechanics.

Even if the average street criminal can find ways of keeping their face off of cameras, the presence of those eyes can still act as a deterrent (or a witness) to heat-of-the-moment assaults. We all want to live in a world where these measures aren’t necessary, yet we also all know we’re not there yet. As we work to heal breaches of trust with police around the world, using AR in place of the human touch might not be such a bad idea.

Individual health and well-being will be linked to our ability to provide comfortable living and working spaces for billions. We know that a huge chunk of a city’s energy expense is eaten up by lighting alone.

We need more energy-efficient light bulbs and heat sources, but we also need smart spaces that turn off lights when nobody is present and heats only rooms being actively used. And these standards will apply to more than just residential buildings.

Developers of commercial and common urban spaces need to design and build with an eye to energy efficiency as much as cost-effectiveness. Because the two will be intimately related as the expense of powering cities goes up along with global energy demands.

In addition to all the infrastructure projects above, the actual vehicles and machinery that will operate within our systems need reinvention too. And through Augmented Reality prototyping, creating the industrial equipment of the future starts with extremely cost-effective digital modeling.

Like the BIM data threaded into buildings or urban streets and substrates, the machines of tomorrow will spend much more time as digital concepts than ever before. And when they do come to physical fruition, everything from city buses to wind turbines will have a digital history that informs their Digital Twin over the item’s lifetime.

Upgrading an entire city is a monumental transformation. If you work for a municipality or a region, you might feel the urge to turn your head and quit before you even get started because the task is too large.

Implementing technology solutions like Industrial AR is complicated and best viewed as an ongoing process. Being a part of the solutions is important to the entire Stambol team. So, we’re ready to answer questions and help in any way we can. Reach out to our visionaries to learn how we can help your community move forward into a brighter future.